Jenny Martin, one of ATV’s team of correspondents in Midland Montage, has definite views on most things. Take hats, for instance. She has a passion for them, and has a collection of 40 each of which costs 30s to £5.

“Hats are the epitome of all things feminine,” she says. “They should never be worn to keep the head warm or the hair tidy. If a person doesn’t notice the hat you’re wearing, burn it immediately.” Her happy outlook on life is reflected in many of the interviews she undertakes for Midland Montage. She talked to rollerskating enthusiasts while skating with them; interviewed a judo expert, then threw him over her back; and took part in a physical training demonstration.

A former journalist, she says that she finds TV more stimulating. But as a freelance writer and woman’s page editor she has met many famous people she would like to interview on television They include Lana Turner, Lady Docker, Cary Grant. Dawn Addams and Dame Edith Evans — “the most remarkable woman I’ve ever met.” When Jenny was sent to Sheffield to interview Liberace, she found that he wouldn’t grant interviews because of his late arrival. Unseen by other journalists, she waited outside his hotel room. 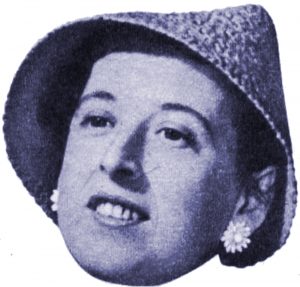 “I heard water running, and realised he was taking a bath. I shouted through the door and asked if he would answer a few questions. ‘Delighted,’ he shouted back, and for the next 10 minutes I conducted one of the craziest interviews ever.

“I yelled the questions, and he shouted the answers.”

Born in New Zealand, Jenny made her first public appearance at the age of eight, when she won a fancy dress competition. When she left school, she began work as “this century’s Florence Nightingale” — but found that nursing didn’t agree with her.

“I fainted so often, the nurses got tired of picking me off the floor,” she recalls.

Jenny next tried journalism and radio work. “It was work I really loved,” she says. “Sometimes I lived on bread and margarine, but other times my menu consisted of caviar and champagne.” Shortly before the end of the war, Jenny married Henry Martin, an engineer. They went to Australia for two weeks and stayed two years, during which time they did a “walkabout” — travelling across Australia doing various jobs.

“It was a wonderful, nomadic existence,” says Jenny. “But Henry wanted to get down to a steady job, so we decided to come to England. We liked it so much we’ve stayed 10 years.”

Throughout her travels, Jenny has not found a city to compare with Istanbul. But she would like to live on a coral island of Australia’s Great Barrier Reef.

“I worked there for two months,” says Jenny. “I turned out some of the best writing I’ve ever done.”

Feature writer at the TVTimes

Take note of Pamela
Hats off to Jenny!
Shaw Taylor
Girl behind the news