Into the mysterious and magical world of puppetry and of the-future-in-space went the talented husband-and-wife team of Gerry and Silvia Anderson to find the inspiration and material from which to produce one of the most popular programmes brought to the television screen by ATV in 1963 — “Fireball XL 5”. 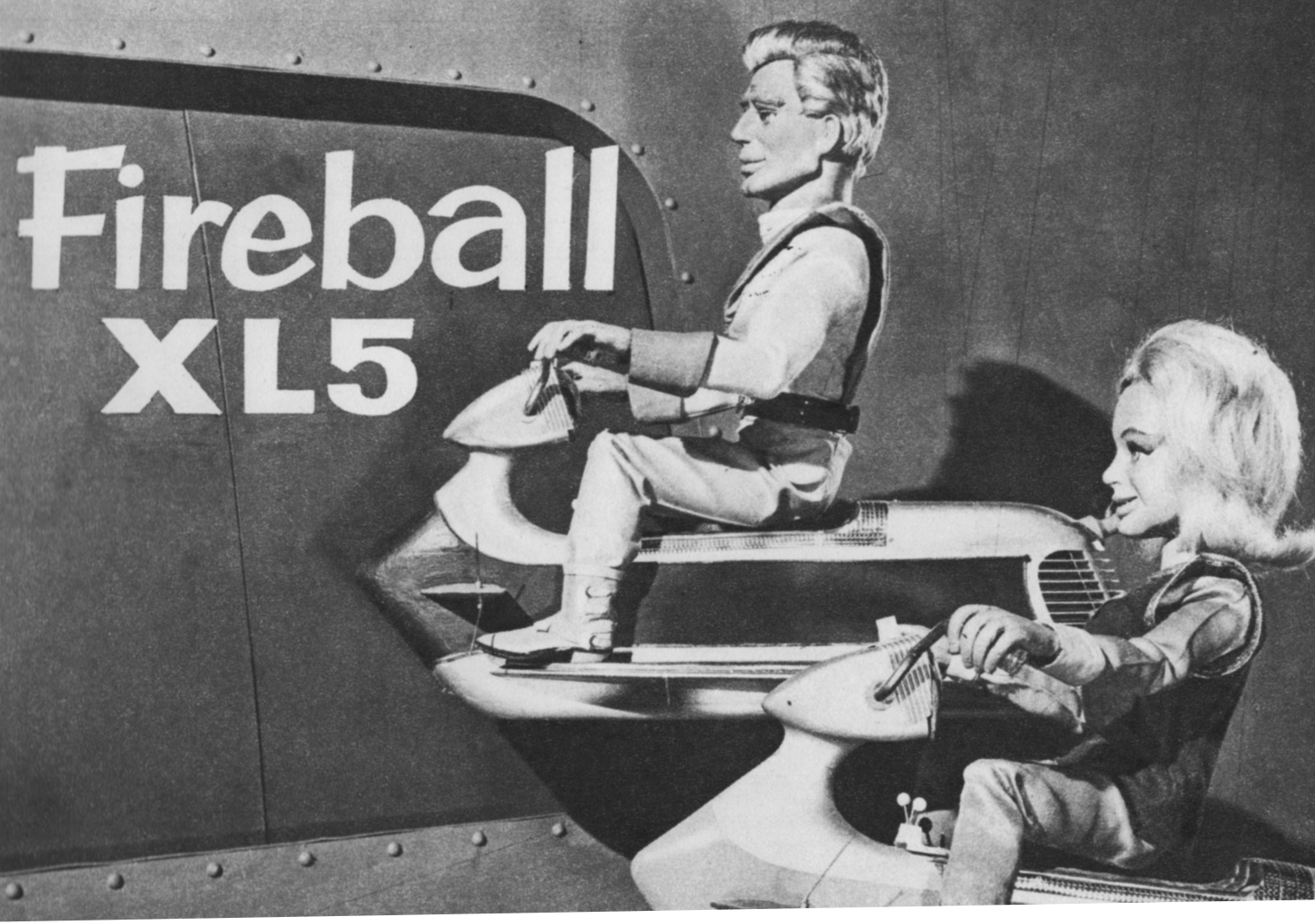 Although the series was intended to cater for the younger viewer, the age groups of those who follow the adventures of Steve Zodiac, Venus and company range from 5 to 50 — and many more beyond.

Fireball XL 5 is a spaceship, the biggest of its type and over 300 feet in length. It is rocket-propelled. It can be away from its base for months at a time. Completely self-contained, it has living quarters for all its crew, with an ultra-modernistic lounge, observation window, a laboratory for research and an “astrascope”, which enables its crew to see in any conditions. It has a nose cone (“Fireball Junior”) which detaches itself from the main part of the spaceship and can make a landing while the spaceship continues in orbit.

Part of the equipment is a set of “jetmobiles”, the motor-cycles of the future, which can travel across any type of terrain, either on land or air-cushioned a few feet higher. They enable their riders to explore any of the planets being visited.

Fireball XL 5 is part of the World Space Patrol fleet. Each spaceship in the patrol controls a different area in outer space. The patrol’s base is Space City, on an island in the Pacific, a purely scientific establishment with a revolving skyscraper, enormous control-tower, laboratories and equipment for propelling the ships into space. Communication can be maintained between base and the spaceships patrolling outer space.

The new puppet characters which come to the TV screen in “Fireball XL 5″ are, like their popular predecessors in “Supercar”, electronically operated. Their heads are made of fibre glass and contain solenoid cells which automatically control their lip movements as they react to the vocal pitches of the human voices speaking the words. The voices are pre-recorded and played back from the control-room as the action is filmed, each wired to the respective puppet players.

The star of the stories is Steve Zodiac, blond, handsome, and in charge of Fireball XL 5. As he patrols a sector of the universe beyond the solar system, he has with him Professor Matthew Matic, a navigation mathematics genius, who has his own navigation bay in the spaceship. Also on board the spaceship is an attractive blonde, Venus, a doctor of space medicine, with her own laboratory in the craft. She possesses a fascinating Continental accent, and accompanies Steve Zodiac on his explorations and adventures.

Another of the regular characters is Robert the Robot, a transparent mechanical man and automatic pilot in the spaceship. He can walk — controlled by sound-waves. He has one particular eccentricity. If his orders are changed or anything goes wrong, he literally gets steamed up. The steam is set off electronically from his head!

Among the many other characters who come into the stories from episode to episode is a lovable animal called a “lazoon”, which comes from another planet. 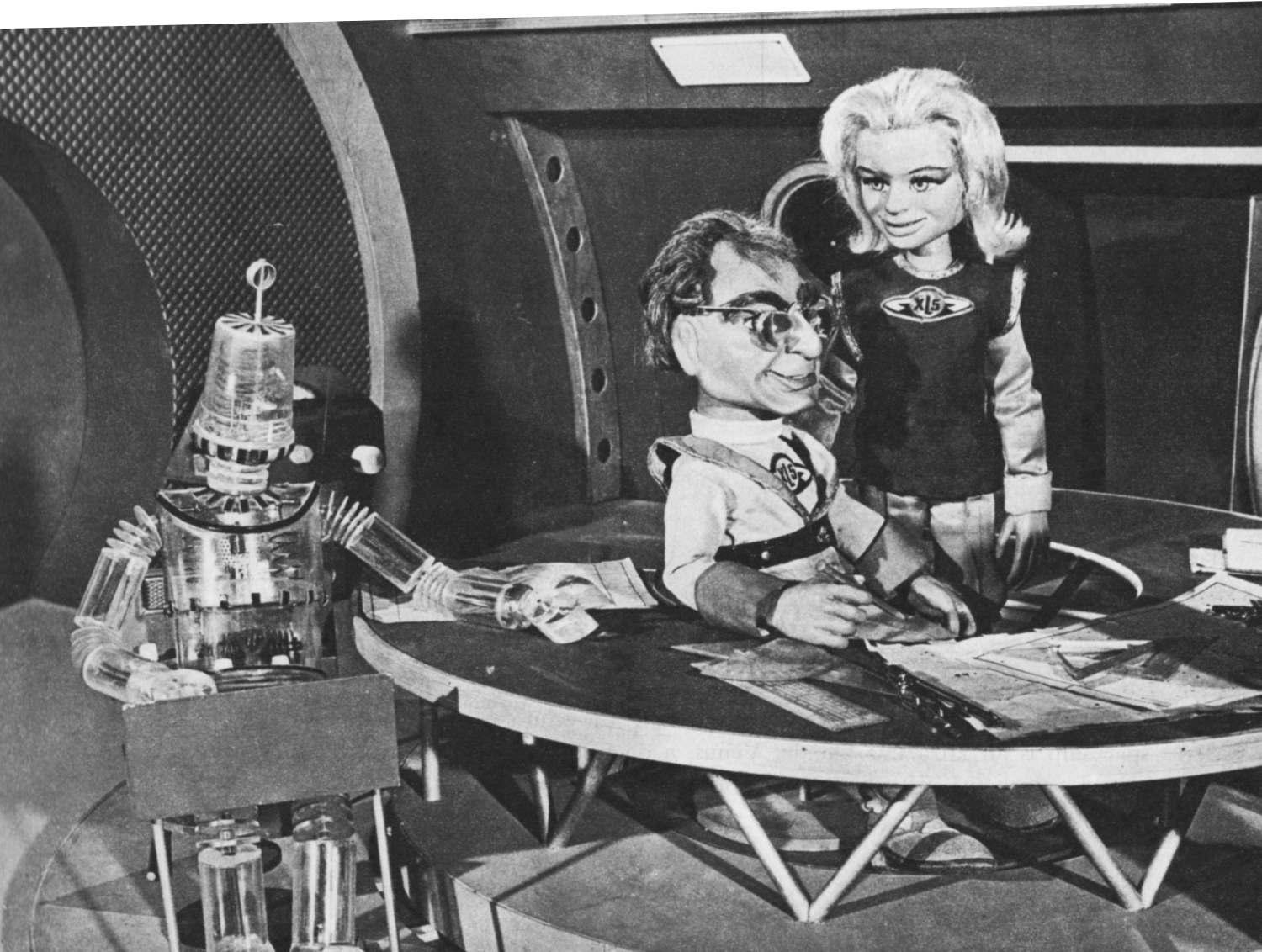 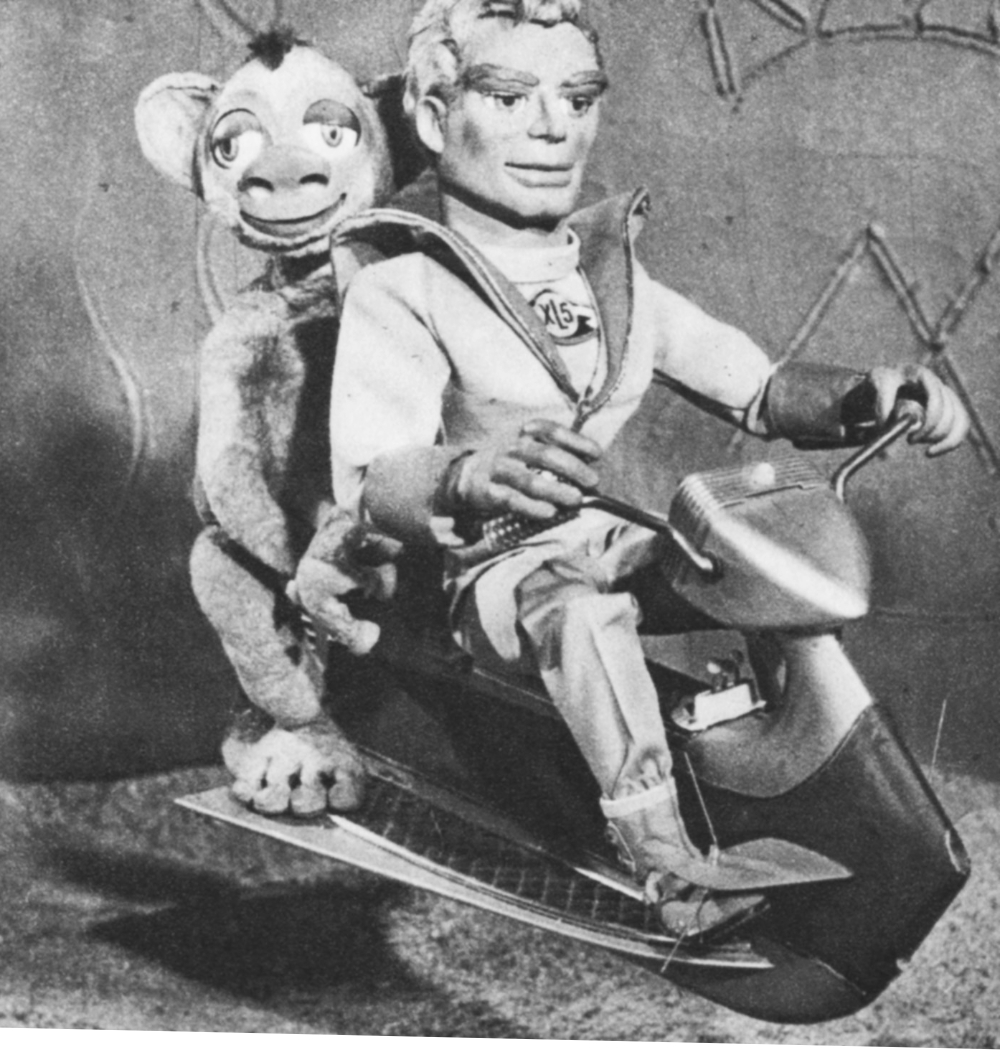 Steve Zodiac takes Loonie the Lazoon for a spin

Because of the out-of-this-world techniques needed for the series, the Andersons and their talented crew created a Special Effects studio, which was added to the existing studio and manned by a skilled team of experts in this aspect of film-making. This studio-within-a-studio is complete in every detail and proved capable of providing all the unique scenes required for the first-ever puppet series dealing with life in outer space in a hundred years’ time.

Space City was built in this studio, enabling close-ups to be shot of the spaceships being fired from their rocket bases and returning safely to land. The model-makers also created numerous planets, with their unusual surfaces shown in minutest detail.

Every type of special-effects procedure is carried out, and the “backroom” boys do a truly wonderful job of creating realistic explosions and planet atmospheres.

The stories in “Fireball XL 5” are thrill-packed. There have never been such unusual adventures on the TV screen. And each one is different. As the spaceship speeds through outer space on its normal patrol, anything may happen. It may run into unexpected trouble, or an urgent message may be flashed to it from base. Steve Zodiac never knows what may be in store for him. He has to intercept a missile which has been fired from an enemy planet and is powerful enough to blow up the whole earth. He explores mysterious underground caverns on a planet and meets weird Green Men who take him prisoner and also capture Venus. There is excitement when a space fuel tanker is being taken to other planets and space pirates come into action. Steve also has adventure in roughing up spies in space, and there was even an episode in which he met a space circus, complete with gipsies and caravans.

There is nothing horrific in the series. The thrills and adventures are achieved without resorting to bloodshed. When it is necessary, for instance, to overcome the occupiers of a planet, a ray gun is fired at them, but instead of this being a lethal weapon it fires coma rays which reduce the enemy to temporary unconsciousness. It has been the thinking of the planners of the programmes not to present Fireball XL 5 as a war machine, but rather as a vehicle used to patrol outer space and keep the peace.