I am writing this with a mince-pie in one hand and a pencil in the other. Believe me, it is not easy. This is a TVTimes Christmas party for all the Lunch Box regulars you will see in Christmas Box on Christmas Day, and for some of their friends, the show business stars.

I suppose we are cheating a bit, having our party early, but everyone is having such a rip-roaring time that I can certainly claim the means are justifying the end.

I can smell the cold roast turkey the chefs are carving, there is the friendly clink of wine glasses and the hubble-bubble of show business talk — all the ingredients that go to make a first-class party.

And who better to be our hostess than Noele Gordon, the popular Lunch Box star whose birthday falls on Christmas Day.

I say I hope too many people don’t give her a joint birthday-Christmas present. She grins and says she hopes so, too.

She tells me: “This will be a specially happy Christmas, because I shall have my family round me for the first time since before the war. My mother, my aunt, uncle and nephew will all be with me in Birmingham.”

Noele and David pull a cracker. Jimmy waits for the bang 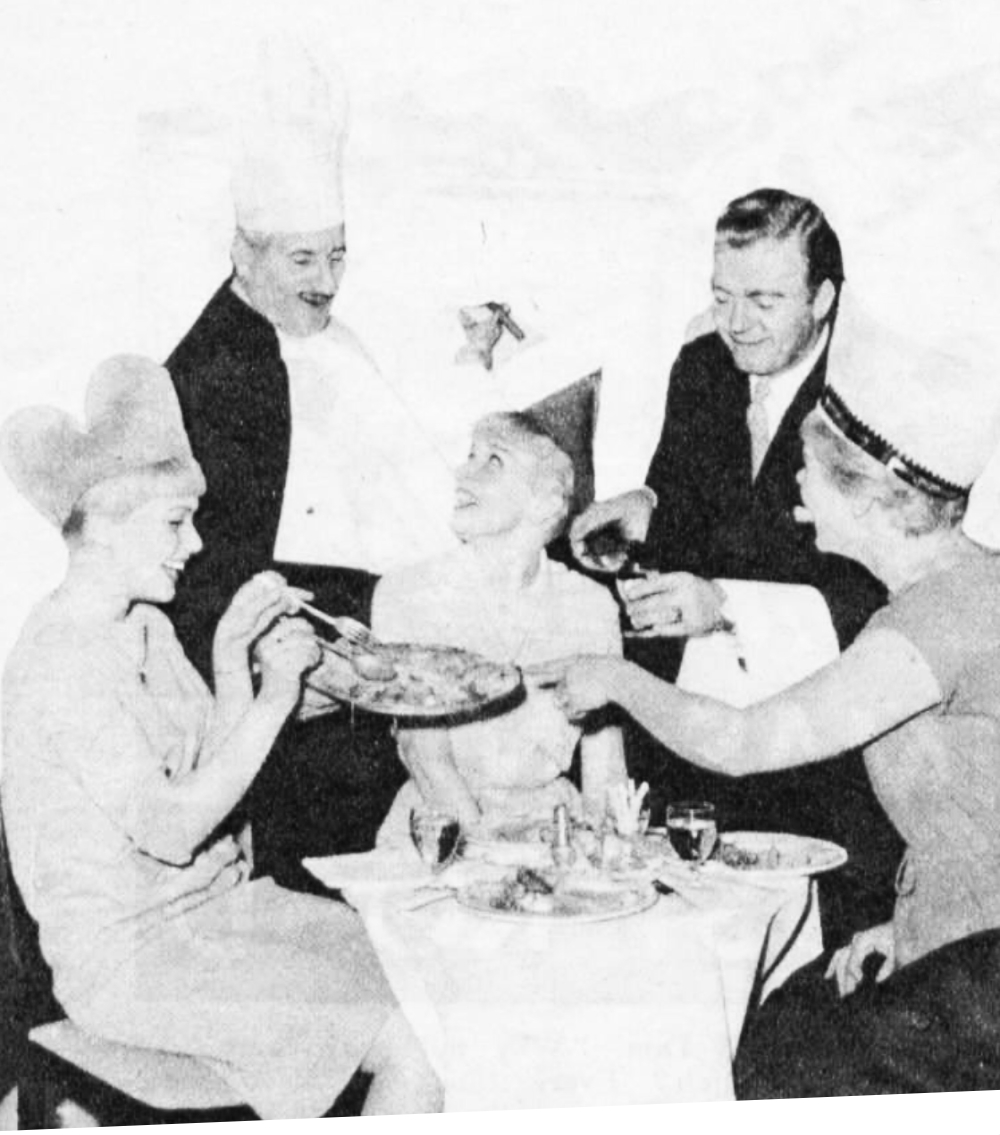 I move to comedian Jimmy Wheeler, sporting a king-size cigar. He adjusts his paper hat and sips his wine, and says: “I’m having a rest this year.

“Instead of pantomime, I shall be appearing in a Christmas show at Southampton with Frankie Vaughan. We worked together in the summer.

“It’s the first Christmas in 35 years that I haven’t been in pantomime. In the New Year, I’m off to Australia. It’s my bank manager’s idea. He told me to go to a place where they don’t know my gags.”

I find David Whitfield talking to Noele Gordon about Robinson Crusoe. He plays Crusoe in a Birmingham pantomime. He tells me: “I’m trying to familiarise myself with the Birmingham dialect. Noele is helping me. She’s very good at it.”

RELATED  You have to laff at Lenny's new faces

David, following the latest trend in pantomime, plays Principal Boy. After the Christmas Eve opening night, he is driving to Hull to spend Christmas Day with his family. Then an early start back to be in time for the Boxing Day matinee. 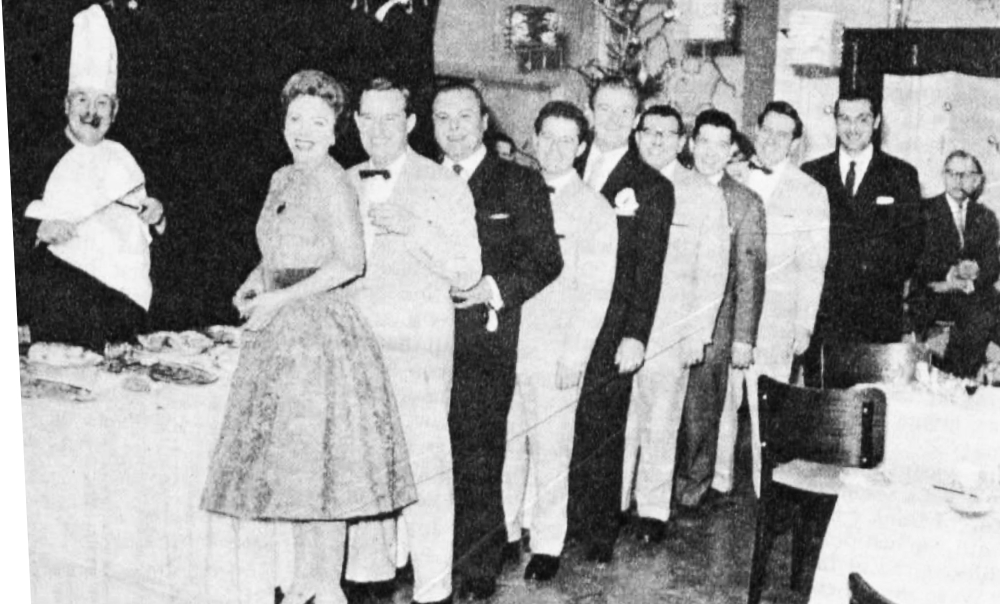 “Come and get it,” cries Jimmy. And they do 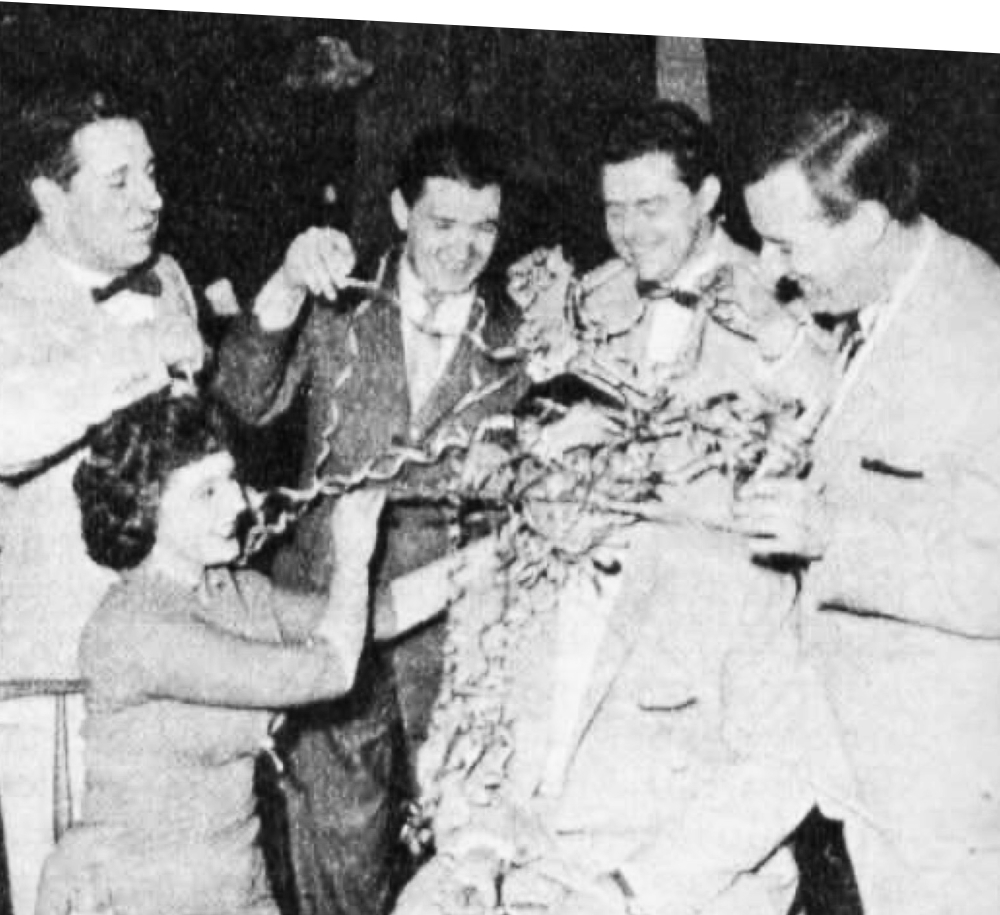 Lionel Rubin, of Jerry Allen’s Trio, gets all “mixed up,” with singer Joan Small joining in the fun

David is proud of Hull. “Look at the stars it has produced,” he says, counting off on his fingers Ronnie Hilton, Ian Carmichael, Freddie Sales, Patricia Bredin and Brian Rix.

And there, standing right beside me, is lovely and attractive Shirley, one of the three Kaye Sisters, and every bit as proud of her home town Hull as singer David.

The three girls are not going to let their London West End cabaret engagement interfere with Christmas. They have planned a traditional Christmas dinner together.

Standing shoulder to shoulder, they gaze round the room.

“This is some reunion,” they chorus. “David, Lauri and George were with us in a Blackpool show last summer.”

Lauri is Lauri Lupino Lane, and George is George Truzzi.

Lauri and George, slapstick comedians of the old school, are surprisingly quiet off stage. But Noele soon talks them into doing a balancing act with a pile of plates.

“I think the way you smashed all those plates on the stage is adorable,” says Noele, with a laugh. “Why haven’t you brought some along for the party?”

Lauri grins. “We would have done — but there wasn’t room with Jimmy Wheeler in the car as well!” 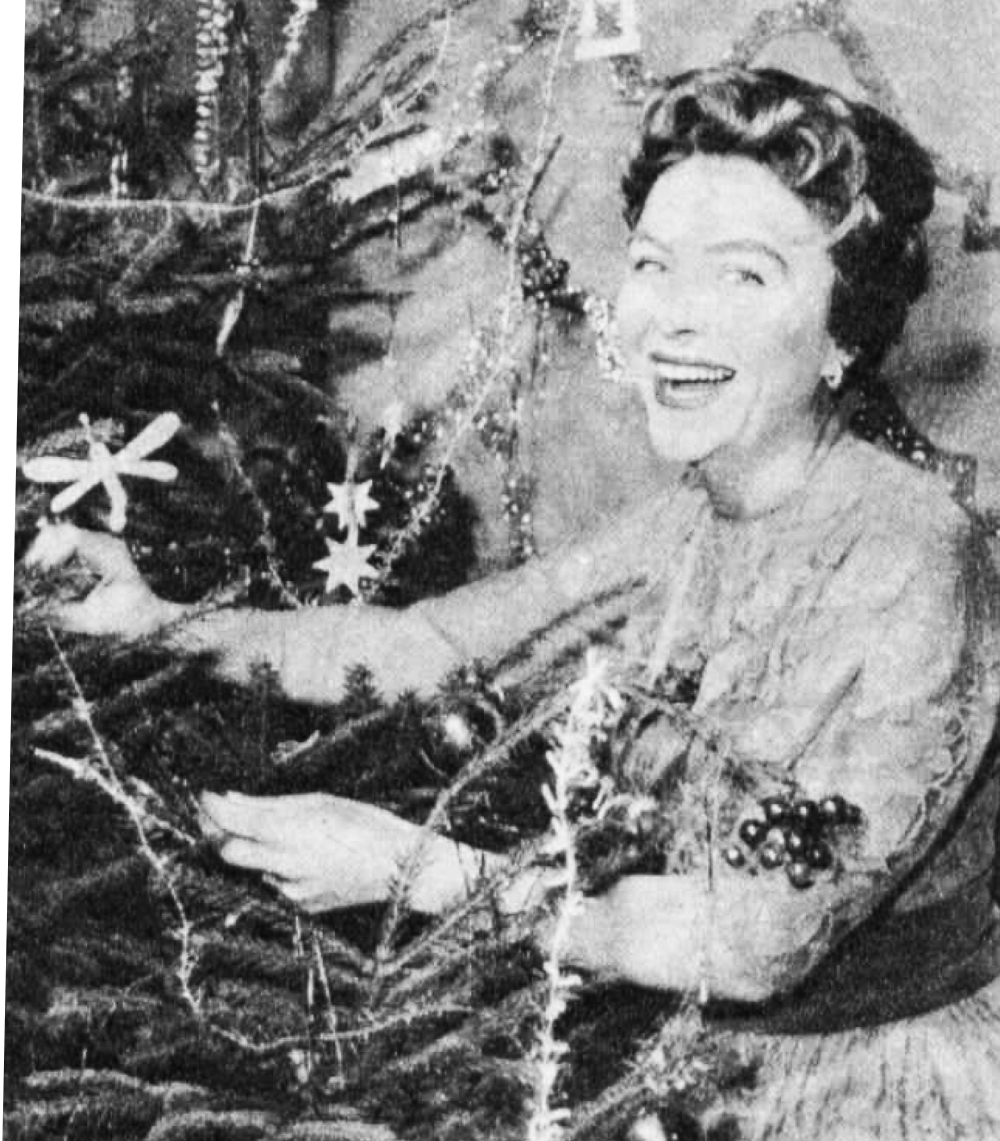 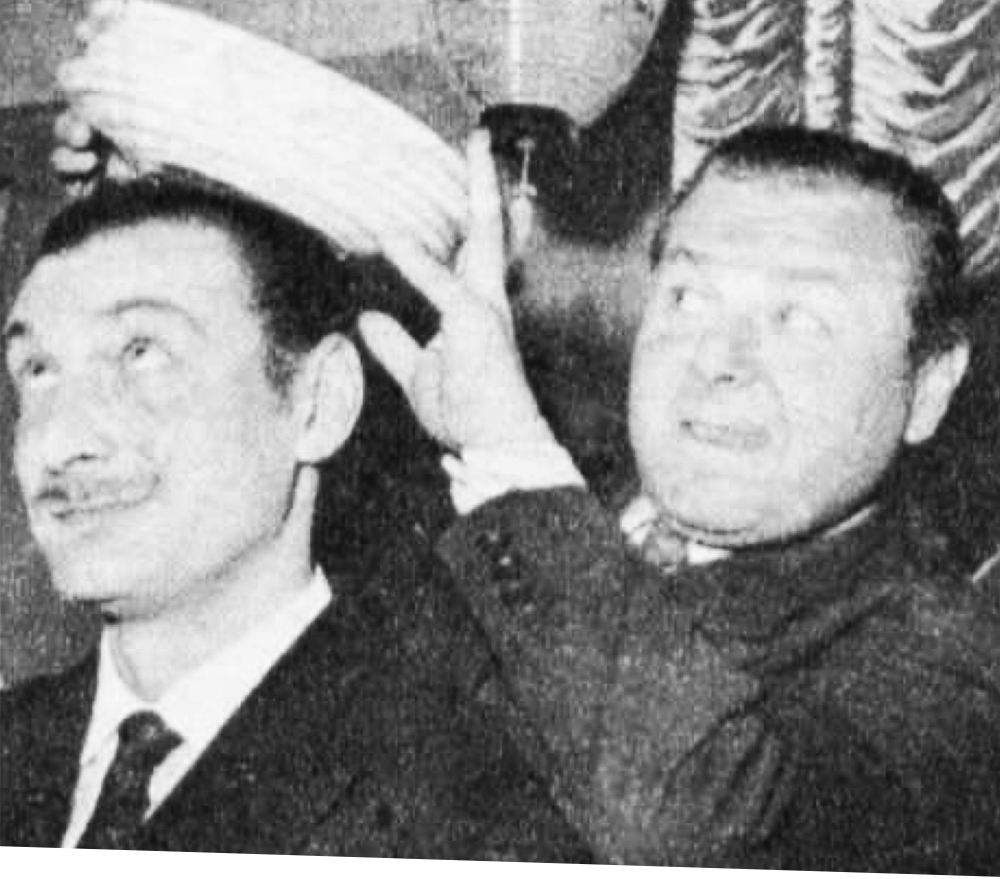 I reckon I am now on my fourth mince-pie, and I am in a group with those Lunch Box stalwarts Jerry Allen and his TV Trio. Like David Whitfield, Jerry has a pretty tight-packed Christmas schedule, and is driving back and forwards to his home in St Albans, Herts, to see his family.

“There’s plenty of work to be done for the Christmas and Boxing Day editions,” says Jerry reflectively.

“Has anyone got a helicopter I can hire?”

I hear Jimmy Wheeler offer his, but I see Jerry does not believe him, though he hands him a sandwich to show no ill-feeling. Producer Reg Watson is enjoying himself, too. He tells me all about the bumper Christmas show : “We’ll be visiting Toyland,” he says.

“Cinderella, Prince Charming, the Fairy Queen and the Wicked Witch will be there, not forgetting Little Bo-peep, Jack and Jill and Humpty-Dumpty. Then there’s a ballet sequence with toy soldiers, and the Alpha Olde Tyme Music-Hall will put on its Christmas show.

“Apart from the usual gang, we’re adding the Concords vocal group, Jean Morton — who will play the Fairy Queen — and the MacTwecdles. Just try keeping these characters out of a special show! We’re very happy to have Eula Parker with us. She was in Australia this time last year.”

Dulcie Sawyer, one of the Christmas show dancers, will have one of the quickest changes in show business. She has just a few seconds to change from “Les Sylphides” to “Cinderella.” 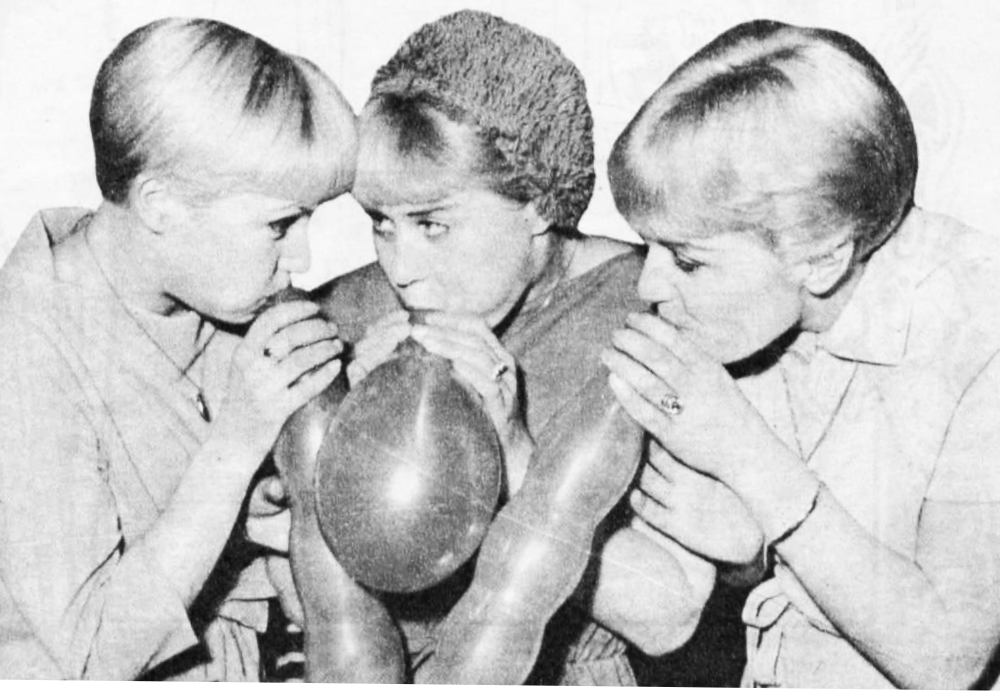 The Kaye Sisters, Sheila, Carol and Shirley, make sure things will go with a bang 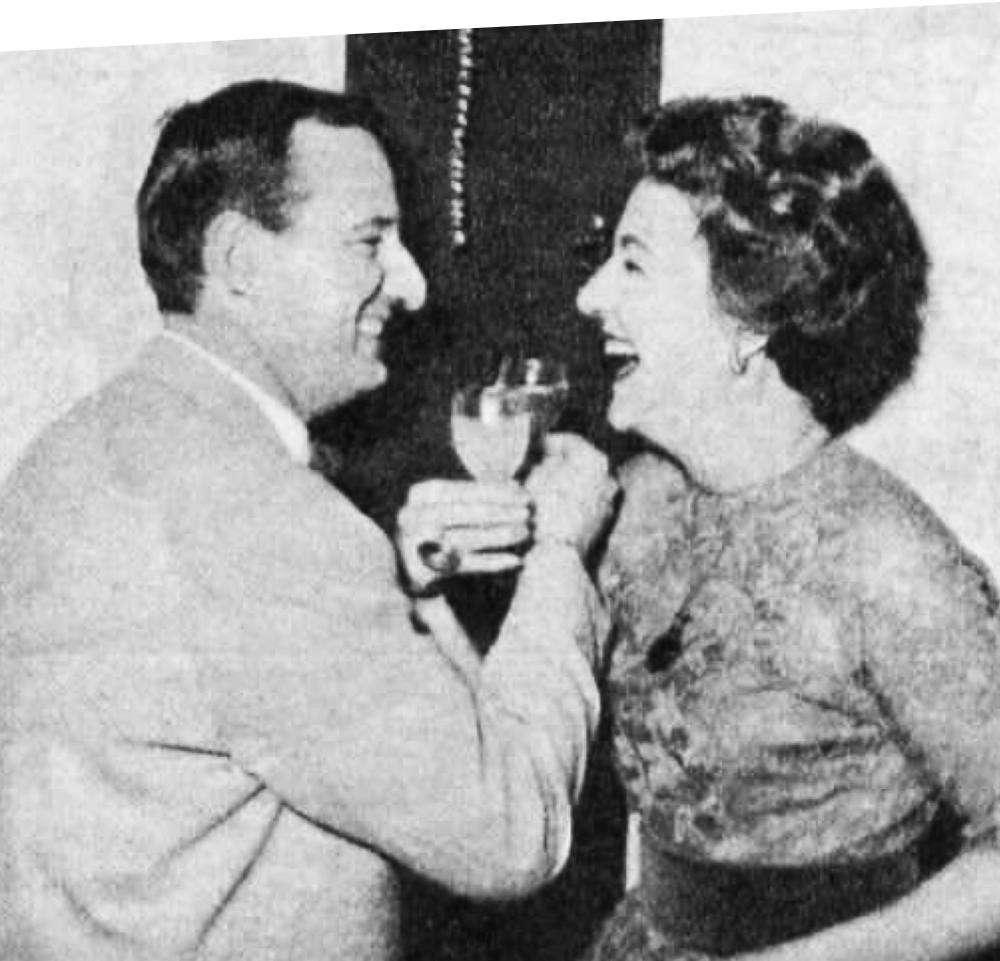 Now the party is at its rip-roaring height. Jimmy Wheeler is giving the Kaye Sisters turkey and telling them: “That’s yer lot.”

David Whitfield is handing round wine. Noele is chatting to Lauri and George, while Lionel Rubin, of Jerry Allen’s Trio, is climbing into Father Christmas gear.

We have caught the Christmas spirit, and viewers will catch it, too, when they see the programme.

Writer for the TVTimes

Arthur Haynes
Tonight's ATV London... in 1968
Where were Elton and Miss Piggy when the lights went out?
Benny Hill