Lancing the boil of pompousness: Bernard Braden takes on the bigwigs

In a year in which the word “satire” was tossed around with gay abandon to describe a new form of entertainment, ATV pioneered a new type of late-night show which, though not essentially earning the description of “satirical”, had as its main ingredient the deep sting that goes with the accepted practice of satire. 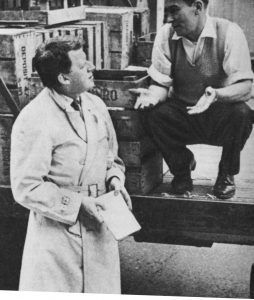 “On the Braden Beat”, as far as television viewers are concerned, is a one-man show. That man is the Canadian-born actor Bernard Braden.

Braden describes his 20-minute programme as “a type of journalistic column of the little screen”. As such the main aim of the show is topicality. An item of news which has caught Braden’s eye can be commented on in a way which is essentially Bradenesque: searching, biting, sympathetic, as the occasion demands—and if it deserves the full impact of the Braden-type humour, then it gets it!

An experienced man of the stage, radio and TV, Bernard Braden can be, in turn, author, poet, composer — as well as displaying his natural talents as a mimic and entertainer.

In his attitude to life Braden has two definite and constantly underlined dislikes: discrimination (whether on grounds of race, religion or politics) and the exploitation of the little man. Much of the material he has featured in his programmes has its origin in these deep-founded beliefs. And he likes nothing better than to learn of examples of these from the very people to whom he speaks through his show.

Braden does not set himself up as a preacher, nor as a corrector of wrongs, but he honestly believes that, by bringing what he considers to be malpractices—whether of landlords, big business, politicians, civil servants or merely smart-Alec door-to-door salesmen—to the attention of the general public he will have done something to rectify a wrong.

RELATED  You have to laff at Lenny's new faces

Braden likes people. His programmes prove this, for it is essentially about people and what he thinks will interest them that is his governing approach to the planning of each programme.

From his relaxed position behind the big desk into which he slumps in a cloud of cigarette smoke at the beginning of each show he waxes, seemingly at random, about topics of the day which are currently occupying the attention of most of his viewers. He gives his opinion on new books, films, gramophone records, new styles of fashion, personalities in the news, incidents which have caught the public imagination.

But there is no random approach to the content of a programme. For the five days preceding each show Braden and his team of four writers will have been out and about — in pubs, clubs, offices, shops, meeting the people whose interests are mirrored in the programme, finding out what they are talking about and what is currently interesting them most.

With humbug and officiousness Braden is particularly scathing. Using a special talent for mickey-taking, where music and words can be married to tear away the last vestige of false respectability, ht has perfected a means of writing lyrics to popular songs which he sings while “doctored” photographs of some special subject whom he wishes to expose or hold up to ribaldry appear on the screen. It is often an embarrassing experience for the person under fire, but it is never undertaken purely with malicious intent. The presentation is always amusing, reflecting technique in its concept and presentation, and if behind the humour and impact the Braden message comes through, then this more than satisfies the author.

RELATED  It's the Muppet Show...

When Bernard Braden is “On the Braden Beat” anything is fair game for comment. This is how Braden likes it, and judging by the popularity of his , programme it is also to the liking of the millions who make a point of staying up late to be with him on one night of every week as he looks at life and all that goes to make it up.

You have to laff at Lenny's new faces
Benny Hill
Shut That Door!
It's Crossroads' 3,000th Birthday