Who are ATV Midlands?

“ATV the Midlands” has a record of seven years of sustained enterprise and expansion in the region which was the first outside London to be served by Independent Television. 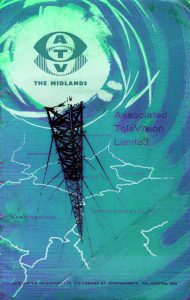 A sense of excitement and readiness to face new challenges marked the service in its early days. It is still the characteristic of a progressive undertaking ready to meet the needs of changing times.

The Midland area is the most “television conscious” in Britain.

Licence issues show that there are more receivers operating here, per head of population, than in any other region. The Midland audience will soon approach seven million: in the main evening periods 70 per cent of viewers prefer ATV programmes.

As we strive to hold the mirror of life in the Midlands we are encouraged by this evidence of public approval. Midlanders are realists: they know what they like — and they like what they know Channel 8 will supply.

Programme output has improved in range and character. That policy will continue, for our planning is backed by the finest technical resources, artistic and creative skills.

The Midland area is one of contrasts. It includes industrial and rural interests in great variety, all backed by strong local loyalties and cherished traditions.

In the great diversity of those interests, television plays a major role by showing the world to the Midlands — and the Midlands to the world.

In the exciting and expanding world of television, pioneering achievements in regional broadcasting stand to the credit of ATV

In its service to the Midlands ATV were :