Why not advertise on ATV in the Midlands?

The life of any commercial television service depends upon two things — the quality of its programmes and the support of advertisers. 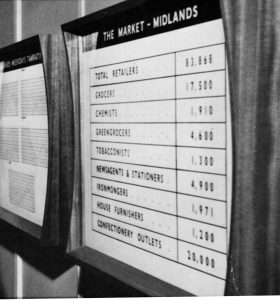 In Independent Television the advertiser has no control over the programmes themselves, for anything like the American system of “sponsorship” is forbidden. Instead a limited amount of time is set aside in each hour for “advertising breaks”, usually of about two minutes’ duration, either after the end of a programme or in a carefully-chosen natural break. Although the advertiser has no say in deciding the programmes, he does have all the rights of a buyer in a free economy. He expects — and gets — value for his money.

If he is dissatisfied with one television company he can switch his advertising to another operating in the same area; if he finds that television as a whole is not doing a worthwhile job for him he can use any one of the many other forms of advertising. It is against this background of free choice that ATV’s record in the Midlands must be judged.

ATV’s Account Executives advise clients and agencies on all aspects of television advertising — what sort of advertising is best suited to a particular product, the size and composition of the ATV audience at different times of the day, how to support a television campaign with planned merchandising, and so on.

When ATV’s first Midland programmes went on the air in February 1956 the total audience available to advertisers numbered 650,000 viewers. Today more than 6,000,000 Midlanders, almost three-quarters of the total regional population, are ATV viewers.

An evening programme screened between 7.30-10.30 is seen in something like 55 per cent of all the 1,700,000 homes with Channel 8 receivers. This will provide an advertiser with an audience of over 2,500,000 viewers to watch his advertisement. No other single advertising medium in the Midlands can provide anything like this coverage.

ATV has recently carried out one of the most extensive research programmes ever undertaken in Britain, and more marketing information is now available for the Midlands than for any other TV area. The results show the Midlands as a prosperous, thriving area with a higher-than-average standard of living — a rich potential market.

Compared with the United Kingdom as a whole the Midlands has a faster rate of growth of population; a consistently higher level of employed population and a consistently lower level of unemployed; a greater proportion of people in the middle income brackets; a greater proportion of families living in four or five-roomed houses ; more than its due share of factory space and more new factory construction; 15 per cent of the total U.K. population but 17.7 per cent of the U.K. gross output of manufacturing industries and 20.1 per cent of the total U.K. labour force in 19 per cent of U.K. manufacturing establishments.

How are ATV’s rates decided ? An extensive study of the accurate surveys prepared by Television Audience Measurement Ltd. (T.A.M.) has shown that viewing habits tend to run very much to a pattern. By combining an understanding of these basic viewing patterns with a knowledge of future programme plans, it is possible to forecast with considerable accuracy the number of people who will be watching ATV at any particular time.

ATV’s Midland rates are based on these estimates of future viewing. The aim is to provide a “cost-per-thousand-viewers” figure that gives a constant value to the advertiser.

The cost of advertisements varies from £10 for a five-second flash to £625 for a thirty-second spot in the evening. It is this wide range of rates that makes television such a flexible medium, for, whether a business is prepared to spend £100 or £100,000, it can buy a campaign on A.T.V. that will pay worthwhile dividends.